How to Avoid The Lure of Fake Online Success

As a digital marketing agency owner, I am targeted with ads from the fake it until you make it brigade all the time. Self-confessed legends of the world and suchlike telling me how I can earn a gazillion pounds a day from the comfort of my own swimming pool. It’s bloody annoying to see people, some of whom I have met in real life, lie and mislead general members of the public to follow their blueprint to ‘success’.

I am writing this to tell you… a large percentage of these people claiming huge success are not living the dream. Some are couch surfing and living on a minimal day-to-day budget. Nothing wrong with that you might say…

There is nothing wrong with the lifestyle per se – but to package a lie and sell it to unsuspecting people who believe the seller has numerous big deals coming in by the hour. That’s what’s wrong.

The saying – if something seems too good to be true it probably is – is one to be aware of when navigating the masses of content online – particularly paid content.

People are finding it increasingly difficult to understand who are the genuine experts of a particular industry, and those that rely on the power of attraction (looks, charm or both) to woo sign ups to their online get rich quick scheme.

Fake It Until You Make It

A picture can speak a thousand words… or a dozen mistruths. In this article I cover some online situations that you will come across on social media and elsewhere online that may not be as they first appear. How to spot the fakers from a mile away – save yourself money and make real life comparisons – not fantasy ones.

Covered in this article…

With one of the most successful entrepreneurs ever born, Richard Branson, telling us the following “If somebody offers you an amazing opportunity but you are not sure you can do it, say yes – then learn how to do it later!” It is no wonder people are applying the fake it until you make it mentality to every day life. But how do you distinguish between the fakers and doers in an online world bursting with content?

Self-improvement gurus include well-known and financially successful people such as Gary Vaynerchuk and Tony Robbins, to the lesser known online entrepreneurs that feel the urge to tell you to give up your job and follow their advice TODAY whilst posing next to someone else’s Ferrari.

The self-improvement industry is growing considerably. People are keener than ever to learn how to craft an alternative lifestyle to the traditional 9-5 grind. However, the way in which they want to learn this is changing fast. Most are fed up with paying for information and it having no tangible, positive effect on their life. In fact, they are aware it could have a negative impact and make them even more confused about the recipe to their personal success story.

Anyone can purchase courses from the majority of gurus claiming to change peoples’ lives overnight. Only a small percentage of people are capable of putting any advice into action – even if it’s genuine in the first place. Yes, it’s a fact. 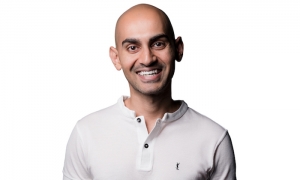 Above: Neil Patel – a leading online marketer and SEO expert

It’s aspirational for many in today’s society to see financial success and some get lured into thinking they can achieve it overnight – or that financial success means happiness. However, being authentic is key to building a long-term and sustainable personal brand.

Take Neil Patel as an example in the digital marketing world. Arguably the most linked to SEO / digital marketing professional in the world. He dresses fairly casually, and posts nearly all his video on a plain coloured background. No lambos, and no 360 view of a penthouse apartment in Monaco. Just very easy to digest and useful content. Whatever your views of Neil (he has been accused of rehashing other peoples’ content in the past) he ranks consistently for all manner of digital marketing subjects and has one of the largest audiences around. Avoid being sucked in by the lure of flash cars, expensive watches and glamorous locations at all costs.

I wondered if scam was too strong a word. However, it is the perfect word for describing what some so-called ‘influencers’ are doing to rid unknowing people of their hard-earned cash.

For those that may not be aware, an influencer is an individual with the potential to influence a consumer to buy something. Influencers usually have a following in a specific niche. This could be fitness, lifestyle, food, or any manner of subjects. Influencers range from micro-influencers, with small but targeted followings, to celebrity influencers (think Ronaldo, Kim Kardashian etc) with more general audiences.

Influencer scams come in different shapes and sizes but involve taking people’s money or goods in return for promotion that is either exaggerated, faked or non existent. The problem exists mainly on social media platforms. Fake followers, comments and likes are relatively easy to come by and artificially inflate the appearance of reach and influence. So, if someone charges X amount per 10,000 followers promotion and they have 10,000 genuine followers but 90,000 paid for followers – you are paying 9x over the odds for what you think you are getting.

It is estimated that fake followers in influencer marketing will cost advertisers $1.3 billion+ this year. There’s a few ways to understand whether someone’s following and influence is genuine but the best way is to identify the influencer yourself in the first place. Understand who they are, what they stand for and the power of the messages they are delivering. And, as a general rule, treat influencers that reach out to you or your business with extra caution. Are they really that passionate about your brand they would reach out to you directly asking for money or goods to promote them? If they are genuine in their love for your brand – perhaps they’d consider helping you out for free initially.

There are other scams to look out for including cloned profiles, whereby imposters clone the profile of a successful account and then look to get free merchandise or payment in return for promotion (which doesn’t happen). You could be targeted via email or on social media and the fake profile could be difficult to distinguish from the real version. Verified ‘ticks’ on certain social media profiles help decipher the genuine accounts from the fake, but this isn’t really applicable for influencers that aren’t celebrities, or those with more modest followings.

Solution: Social listening and reaching out to specific individuals that you have identified as having a genuine influence on your niche is the best solution to avoiding influencer scams. It doesn’t matter whether the individual has 1,000 or 1million followers. Ultimately, it is their influence on your target market that happens and the genuine interaction their content receives. Build up a relationship with influencers in your market and you could eventually receive the power of their services at a much lower cost than if you reach out to them cold.

In the early days I was victim to this. We often hired freelance help for specialist tasks. Some of these freelancers had grossly overstated CVs and fake references – experts in the world of fake it until you make it. We didn’t choose the cheapest – as we knew that could mean poor quality work. We were willing to pay, but it wasn’t a watertight hiring strategy.

Examples of bad hires include when one (expensive) developer destroyed a website beyond recognition without testing / cloning their code and made irreparable damage to FTP files. In addition, we received plagiarised content from freelanced copywriters and designers. Lessons learnt. Now we have far better ways of detecting the fake it until you make it brigade and have built a trusted network of service providers.

Ever worked with someone that sub contracts jobs to others’ for a much cheaper price without telling you? Yes, that happens too.

I am a member of Facebook groups to help me stay ahead of the latest trends in digital marketing and troubleshooting of any issues that arise with Facebook Ads, SEO and suchlike. A common theme in these groups are people, that clearly have a knack for selling, asking questions such as ‘I have just signed XYZ client on a 6month retainer – how do I run ads for XYZ?’.

Or… ‘We have made changes to a new client’s website and the rankings have fallen off a cliff.’ Some of the questions are even more basic.

One such real life example that shocked me was this: ‘My client has asked why we are charging a monthly ad management cost AND a percentage of ad spend cost – what do I say?’. This is someone, receiving money from a client that doesn’t even know what or why they are charging for. It is VERY common in digital marketing…

In the same groups, often small business owners, who are attempting to run their own ads or managing other aspects of their marketing will ask questions. They are quickly inundated with ‘experts’ asking them to PM them. Desperately seeking a solution to their problem they provide admin access to certain accounts to people they have never met, spoken to or verified elsewhere online.

If you are the person looking for help don’t do this – it’s like handing a complete stranger keys to your house without realising they will ransack it or never hand your keys back. Look for the answers you are searching for directly on YouTube or hire a professional digital marketing agency.

It’s not just individuals up to these tricks though… large Digital marketing agencies that should know a lot better do it, too.

For a ‘donation’ many agencies land themselves a seat at prestigious awards dinners. Strange it may seem that they may scoop an award or two as well. Subsequent press that they are ‘leader in search marketing’ or other similar awards make the general public believe they are the industry leaders.

On many digital marketing agency websites you will see a testimonials or client list section. Don’t just look for a Coca Cola or HSBC Bank logo. Look for genuine testimonials with names attached to them. Speak to the people in question for further reassurance. It is common for big corporations to outsource tasks to a wide variety of agencies. We’ve designed landing pages for some big companies but don’t class them as clients if it’s a small one-off task and don’t have permission to do so.

The courses themselves are fine – but there’s little policing as to who actually gets the certificates. Plus, you can have ‘employees’ that are Google accredited that actually end up doing zero work for the client.

Although this may be music to your ears – the truth is, if you’re looking to rank for competitive keywords expect 6 months-12 months and beyond to be your timeframe for high traffic / high converting search terms. The older your web domain, the better. A new web domain could take a longer time to build content, links, traffic and trust with users and search engines.

How to Find a Good Digital Marketing Agency

Check testimonials for authenticity and the level of work completed

Don’t go ‘all in’ from day one with anyone

(eg, have you ever worked with anyone in the XYZ niche – what was your biggest success / failure)

Writer’s Bio: Lewis Murawski is the Managing Director of Kahootz Media. You can connect with Lewis on LinkedIn